LFG: How Many Make a Party?

In what I can only describe as fantastic news, it looks like a group finder is coming with patch 1.3 (via both the April 27th Q&A and earlier requests for feedback). Unfortunately, the initial release of the system seems limited to matchmaking within a single server (source).

But what about players on low-population servers?  Do they have the population to support a reasonable LFG system?

Ideally, Trion or Blizzard would hand me a large data set on player behavior, and I'd get to go to town analyzing segmentation in the MMO playerbase and its influence on the availability and fun of small-group content. Mmmm... happy data dreams...

Absent that, there is another way to get some insight on whether low-population servers in SWTOR can support a LFG system: SIMULATION!

The basic idea is simple: I wrote a program to generate test data given some assumptions about how players behave. I then ran that program thousands of times, with different assumptions about player behavior, to see how the results changed.

The 'Perfect' Balance
For example, suppose that SWTOR was a utopia - the holy trinity of roles was distributed perfectly across the lvl 50 playerbase: Tanks were 1/4 of the population, Healers were 1/4 of the population, and DPS were 1/2 the population. At regular intervals, one of these players (randomly chosen across the three roles) enters the que. Imagine further that players were perfectly patient, never ditching the que. Using this, I can set up 100 sample ques of 1000 players, and take a look at the average wait of each.

Egads! Wait times spiral off into infinity - and beyond!* As players enter the que at random, a surplus of players for a role develops, causing the wait times for players of that role to increase.

So impatience (or limited playtime) is a great thing for a LFG system.

Impatient Players
Now suppose that players are willing to wait patiently for some amount of time, and after their patience wears thin, they have a 20% chance of dropping the que for each extra minute they wait. LFG que waits dramatically decrease:

The surplus of players for a role gets evaporated by the que droppers.

But just how much (im)patience is needed for the shorter, more stable ques?

A little impatience goes a long way.  Even if players are willing to wait half an hour before they slowly start dropping, just that little bit of impatience lowers que times by about 10 minutes... and it does this without throwing too many players out of the que - 92% of players still get placed.

Distributing Time
So far I've assumed that players stroll in at even intervals. The population of a server doesn't look like that, though.

Server population peaks late at night, and disappears during the day (approximated by the plot on the left). The effect on the que is clear: que times shorten during peak hours - dropping to less than 5 minutes - shown by the smoothed averages in the top right plot.  Unfortunately, this comes at a cost: ques all but disappear during the day - only a handful of players get groups from 4am to noon (go to sleep!).

Tank Shortage
All of this leaves aside at least one crucial component of ques: tanks and healers tend to be rare. 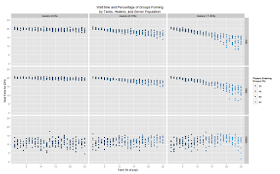 Amazingly... if tanks are truly scarce, only 1 in 5 dps that que will get a group, which is absurdly low, so low that I wonder whether the tank shortage is smaller than most people suppose.

As always, serve with a large heap o salt: there are a ton of variables I didn't model, or modeled pretty simplistically. If anyone knows a good source of data on players to help reduce some of that uncertainty... I'd love it.
Mythbusting at 9:47 PM
Share